Chianti is not just a wine you know . It is a region known for it's abrupt hills , rolling away to the south of Florence, Italy and is the indigenous home of the Iris made famous in Italian perfumery . Any wine produced in the Chianti region can be called Chianti . The wine we drank when we were visiting Chianti was from Sangiovese grapes if I'm not mistaken : Fresh , fruity, yummy : and grown on the Pruneti Farm . Wine , fragrance , sunny Chianti , and peasant food served fresh with 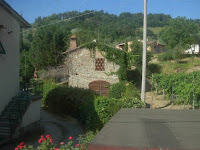 home-made olive oil...lay me down in heaven .
Heaven indeed to take a bus south and spend the day with real down to earth people and real down to earth food...Near the village of San Polo lives a family dedicated to hard work , preserving the farmers way of growing the lowly Iris Root . It looks like not much at all when it comes out of the ground . 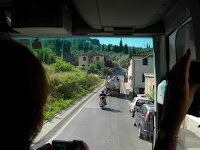 My mom grew lots of flowers when I was growing up . I remember how , in the fall , she would pull the Iris and Tulip bulbs and separate them , placing them in paper bags and putting them in the basement , near where we kept the bags of potatoes . Here they would winter over in the cold midwest , and she would plant them as soon as the ground thawed .
When Sniffa planned our trip to Pruneti Iris Farm , I knew we were not going to be looking at the delicate tissue paper petals of the flower . They bloom first thing in the early summer. We were going to see the bul

bs coming out of the ground ...like my mom used to do .
They don't make lots of money doing the back breaking work of pulling Iris bulbs , believe me .
We boarded the bus around 9 AM at our hotel , heading south and into the rolling hill country of famous Chianti . On our agenda was lunch served with olive oil from the Pruneti Farm . It was a hot summer 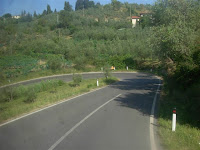 morning , and an hour later and a few hairpin turns on narrow roads in a full size bus , we anxiously accepted refreshments and were ushered into a cool , dim terra cotta reception room . The brothers spoke no English . A wonderfully cute young American , who had been living " up the road " for over a year , was our interpreter . 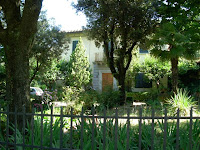 We walked by the villa and into the Iris field , where the silver haired father , Iris fork in hand , swung at the bulbs and filled the wheelbarrow as his father and grandfather have done for a hundered years...
We returned to the front yard where we stood under a wisteria arbor a hundred years old , where the family has dried the Iris roots for generations . The roots are dried whole or sliced and dried , then sold to processing labs where it becomes the precious and costly orris root powder . 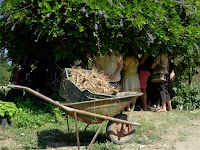 The multi sensory tour continued inside , the tables were set for lunch with red wine they make themselves . The food started coming out of the kitchen , and it got very quiet...the simple delicious delights so fresh , so unpretentious . Passion for olive oil served up on a plate , bruscetta with tomatoes and white beans drizzled with vib 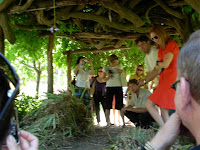 rantly fresh yet mild olive oil and famous bread salad with fresh tomatoes and lots of olive oil .
The fourth generation of Pruneti , the brothers Gionni and Paulo combine " arte and tradizione " to carry on the heritage of olive oil production . They grow three varieties of olives , bottle and sell each as a varietal . Each dish we were served featured a different olive oil . They have also created two blends , carefully selecting and blending the varietals to create something new . 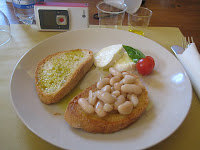 From http://www.pruneti.com/ :
After the third generation we too, Paolo and Gionni Pruneti, have been continuing the family business for some time now. Over the last decade, following a constant reduction in the demand for Irises, we decided to perfect our oil production, focusing especially on all the production phases: from the selection of the old vine groves to the choice of soil and cultivation of the new ones, from the pruning techniques to the improvement of pressing and conservation.We currently produce four types of Extra Virgin Olive O

il which differ in aroma and taste while maintaining a very high quality standard, ensured by the processing systems and by the area which the olives are grown in, Chianti Classico.Recently, in view of the many requests reaching us, we have decided to package and put on the market another product which we have always grown: Saffron.We are also witnessing a renewed interest in the Gladiolus and its bulbs which for many years characterised the life of our family: increasingly often we receive invitations from companies working in the sphere of high quality cosmetics to resume our traditional production. 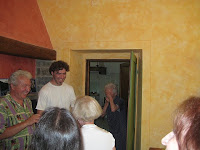 Another memorable day of royal treatment . The cook , their mother or Grandmother , cried and covered her face when we pried her out of the kitchen and tried to take her picture . Many of us purchased a prized bottle of their extra virgin olive oil . I brought home a small bottle of a blend called Viuzzo , which was recommended by the young American girl .
We returned to Firenze enriched and humbled by these people and their simple way of life and the pride they take in it .
at 5:00 AM

Carol,
Wasn't the Pruneti farm the best? The brothers and their family were just warm and genuine, and so passionate about the quality of their iris, and teaching us about the varietal olive oils.

Enjoyed your description of the day; thanks for bringing back the memories!
Gail

Hey Gail , roomie !!
Thanks for reading !